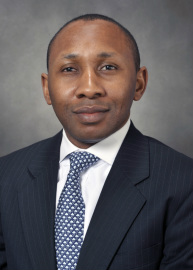 Joe Massaquoi is a Director of Corporate Development at The Boeing Company. Named to this position in January 2012, Massaquoi has over a decade of investment banking experience on Wall Street, focused on mergers & acquisitions in infrastructure related industries including energy/utilities, transportation and telecommunications. Over the course of his career, he has assumed positions of increasing responsibility within several global organizations and has completed project engagements in North America, Europe, Asia and Africa.

Massaquoi received his B.S. in Physics from Morehouse College in 1995, where he was inducted into Phi Beta Kappa, and received his M.B.A. from Harvard Business School in 2000. He has served as an adjunct professor of technology management at New York University, on the board of directors at One-to-World, Inc. (a designated U.S. State Dept. coordinator of cultural enrichment programs), and as an independent advisor on several emerging market investment opportunities.

downloadfreethemes
Make a Donation Today
PayPal securely processes donations for MASSAQUOI FOUNDATION. You can complete your payment with just a few clicks.